Over the past week of September, HYPCOP organized its final and essential workshop for ending the mission. We invited worldwide collaborators Prof. Dr. Rony Huys and Dr. Alexandra Savchenko from the Pure Historical past Museum in London. Prof. Dr. Huys is a widely known copepod taxonomist and crustacean researcher and printed a mess of species descriptions and books together with key identification guides. We have been very joyful to listen to he had time to come back and journey to Bergen, paying us a go to whereas additionally serving to us with species identifications of the numerous, many copepods we had collected in the course of the two years of our mission.

Through the two years of the HYPCOP mission we collected round 600 specimens from totally different localities throughout Norway, together with shallow coastal waters and the deeper elements of the mid-Atlantic Ridge (Loki’s Fort area of lively hydrothermal vents). From all these specimens we extracted DNA from the delicate tissue of the animal. Subsequently, maintaining the laborious exoskeletons, for morphological identification downstream. That is probably the most time consuming and difficult half. The species can generally solely be recognized primarily based on minuscule variations within the look of its legs. Moreover, one wants good taxonomic competence to assign these variations to the 1000’s of marine benthic copepods species. And that is the place the HYPCOP group wanted assist.

HYPCOP began in Might 2020, when quite a lot of international locations, together with Norway, have been in a lockdown and worldwide journey was troublesome and even unattainable. Subsequently, it was problematic for HYPCOP to ask worldwide researchers for more often than not. Thus, we targeted totally on extracting DNA from our collected specimens and build up a barcode library. However what was lacking was the nomenclature of the majority of the specimens. When lastly, our first worldwide researchers might come and take a look at our specimens, it turned out to be an infinite process. With the assistance of Prof. Dr. Huys and Dr. Savchenko we managed now to have virtually 300 assigned names to our DNA library of 500 specimens. Fairly just a few of these are new species and even new genera. Kickoff of the workshop, which might happen at Marine Organic Station Espegrend during every week, photograph by Alexandra Savchenko

Rony and Alexandra arrived Sunday night in Bergen along with mission chief Tone Falkenhaug and mission technician Cessa. We have been stationed on the Espegrend marine organic station in Bergen for the whole lot of the week. It was for Tone and Cessa the primary time they’d lastly meet Rony and Alexandra in individual, after many months of digital communication. It was a pleasant stress-free first night. The following day Anders Hobæk from NIVA and Jon Kongsrud from the UiB joined and we began off the week with a presentation overview of the mission.

The overview knowledgeable everybody about this system of the week and the state-of-the-art of the mission. With the DNA barcode library, we managed to assemble a COI phylogenetic tree. Among the bigger clades have been already recognized all the way down to species degree, however many extra species names have been lacking from the smaller clades. It was as much as us that week along with Rony and Alexandra to establish these final circumstances. We additionally had sooner or later of fieldwork deliberate, to have us work additionally with some recent materials. This we did with assist of analysis vessel Emiliana and the Beyer’s sled. Each stationed at Espegrend Marine Organic station. We tried to pick a pleasant and dry day for going out with the boat and that occurred to be within the mid of the week. We went slightly bit exterior of the Organic Station, with a depth of round 90 – 120m. The Beyer’s sled is an epibenthic sampler, it’s referred to as a sled for its type. We bought many recent samples, however due the online being slightly massive in its mesh measurement, we didn’t get as many small species as we favored. 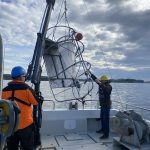 Anders serving to with the Beyer’s sled on board of r/v Emiliana, photograph by Cessa Rauch 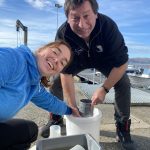 Alexandra and Rony sieving the catch of the Beyer’s sled earlier that day, photograph by Cessa Rauch 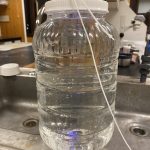 Instance of a DIY gentle entice; a bottle with a funnel as opening and a small LED gentle on the underside, photograph by Cessa Rauch

Subsequently, we additionally tried one other sampling methodology with assist of Anders; he had introduced with him a light-weight entice. Mild traps are very simple to DIY with a bottle and inverted bottle opening, like a funnel, and a small led gentle on the underside. You put in the entice within the water in a single day; the little led gentle attracts quite a lot of small hyperbenthic and planktonic (and a few larger) species. 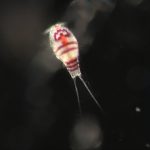 The main focus of the week was engaged on mounted materials, however it’s far more enjoyable to work with freshly caught specimens, that also have their stunning colours, photographs by Alexandra Savchenko 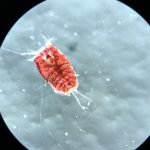 The whole thing of the week consisted of many hours working on the microscope, going by means of literature, dissecting specimens, and assigning species names to the specimens. Finally with assist of Rony and Alexandra, we managed to assign 298 scientific names to 702 specimens in our assortment. From these specimens, we extracted DNA from 593 specimens and produced a DNA library, which we uploaded to the BOLDSYSTEMS (Barcode of Life Information System). This library additionally has all of the metadata of our specimens, comparable to location, depth, measurement, and footage of the specimens (both life, mounted and in some circumstances elements). And it is going to be publicly out there on the finish of the HYPCOP mission.

The week was demanding however very rewarding and we bought many specimens recognized, with even just a few new species and genera to Norway and presumably new to science; all because of the laborious work and assist of Rony and Alexandra. We due to this fact additionally want to take this chance to thank them once more for his or her time and efforts in serving to the HYPCOP mission transfer ahead! Till subsequent time. Rony Huys and Alexandra Savchenko serving to the HYPCOP mission transfer ahead, photograph by Tone Falkenhaug